With regard to the current negotiations on the Pact for Research and Innovation (PFI), the “Network for Science Policy of Social-Democrats” has formulated five essential demands for improving working conditions in academia.

So far, the focus has been on interconnections within the scientific system, international cooperations, knowledge transfer from academia to industry as well as the promotion of early career researchers. We observe with concern that the current PFI negotiations tackle working conditions only half-heartedly. This is why we demand that the federal states and the federal republic of Germany finally tackle the underlying issues explicitly and to set binding agreements in the PFI.

Research and innovation cannot be separated from the more than 100,000 employees at the numerous research centres. Undeniably, research can only serve social progress if there are no frictional losses. Good working conditions, fair participation, and ambitious equality goals must therefore be set as central organisational goals in these pact negotiations.

Lisa Frerichs & Martin Grund. Thanks to Michael Gerloff for his support at translating the paper.

Find the German version of this paper here.

Since 2005, the governments of the federal states and the federal republic of Germany agree upon the Pact for Research and Innovation (PFI) for the advancement of the German research system. By means of this agreement, the German Research Foundation (DFG) and the four major non-university research organisations Fraunhofer Society, Helmholtz Association, Max Planck Society as well as Leibniz Association self-commit to research policy objectives. The focus has so far been set on improvements of the interconnectedness within the scientific system, international cooperation, knowledge transfer from academia to industry as well as the promotion of early career researchers.

The allocation of funds is reviewed at regular intervals and is currently negotiated for the 2021-2025 funding phase. The coalition of CDU, CSU and SPD agreed to “further improve the working conditions in German academia” as well as “to develop goals and measures in the PFI to improve equal opportunities”. The Network for Science Policy of Social-Democrats demands that the federal states, the federal republic of Germany and the non-university research organisations institute the following target agreements:

The position paper as PDF: 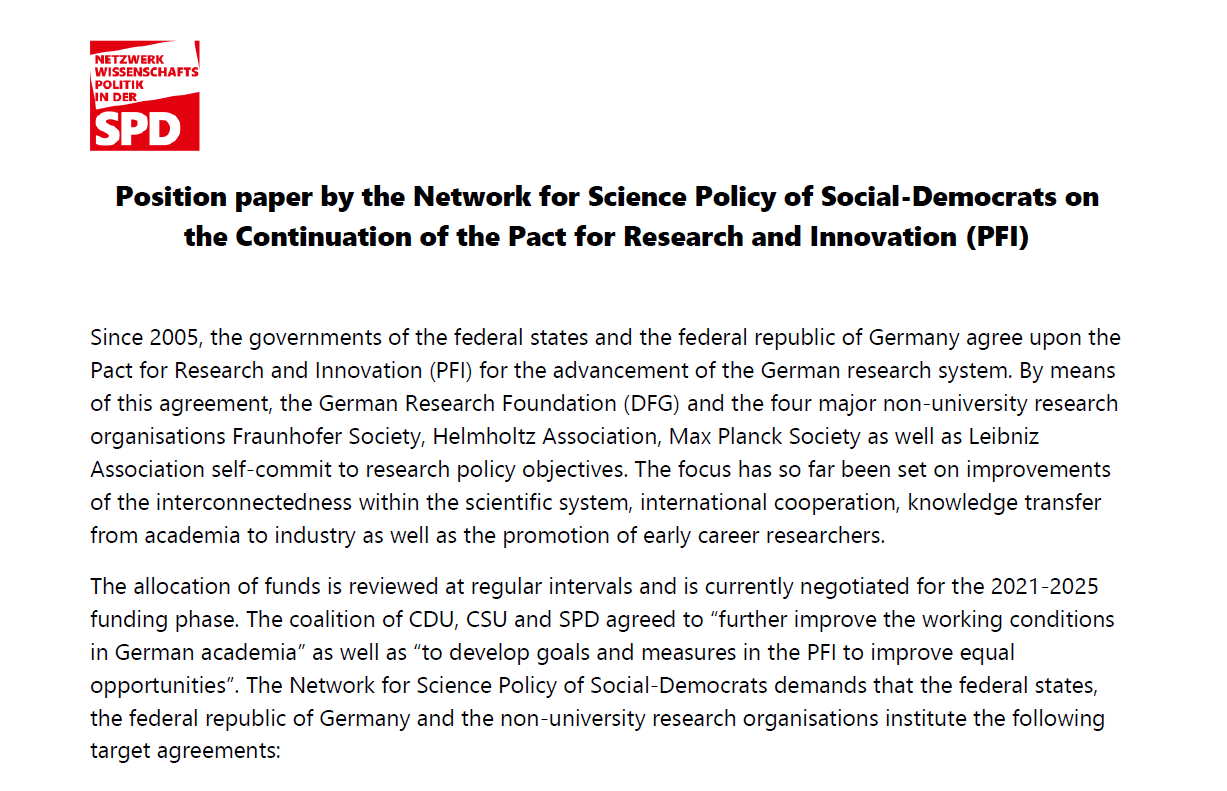